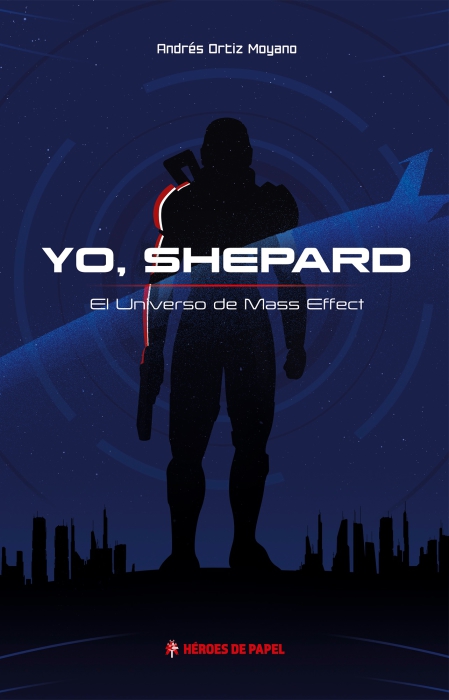 Mass Effect is undoubtedly one of the sagas of RPG having greatest impact in the industry in recent years. The reception by the public has been overwhelming and very soon will come a new episode but already out of the trilogy of Shepard, leading to the saga to new unexplored territory. Mass Effect, whether we like it or not, it changed the way of understanding the RPG and marked a very defined way for BioWare in regards to the creation and design of their games in this genre.

Given the magnitude of this saga, it seems strange emergence of true fans of the same, capable of drinking the winds by it giving rise to a singular devotion. This passionate love arises I, Shepard, an ode to the saga disguised as a trial in which Andrés Ortiz Moyano makes a review on the original trilogy and the related contents. An interesting story edited by Heroes of paper in which the reader makes a quick review by the saga.

I, Shepard is a very subjective, and despite their praises to the saga, is not exempt from criticism

In this regard, I, Shepard could have been rather more ambitious since along most of its pages the author is limited to express their opinion about the saga, sometimes scandalous and direct way, while it is true that from the first moment warns us of this. Despite everything, we are not facing a book in which the criticism is not present, since Andrés Ortiz says the artists of different deliveries of the saga, although that itself, also from a personal crucible.

Despite everything, reading is enjoyable and serves to discover some little-known elements of Mass Effect, although unfortunately, it delves not much in this aspect. And in this sense, the author reveals one of the major problems present in the video game industry: the immaturity of the same. In the first pages of I, Shepard Andrés Ortiz laments that BioWare has not responded or attended to their questions about the saga, preventing or greatly hampering any kind of investigation.

In this sense, it is understandable that if the main source of information is closed in band, it is impossible to access information or provide known data. A practice which unfortunately practice many companies in the sector, even the smallest, preventing serious and quality work can be, relegating the reporting to a mere element more than advertising and marketing.

With this starting point, the author of I, Shepard built an interesting story, although his style can perhaps be somewhat heavy at question continually the reader. What is evident is his passion for the universe created by BioWare, which is reflected in every page and certainly manages to transmit that feeling, making us feel the need to replay this saga.

The author manages to make us want to replay all the saga through the pages of I, Shepard

Andrés Ortiz reinforces its tour of I, Shepard with multiple references to the genre of science fiction literature. A field in which it shows your domain on the subject and that sets multiple comparisons with the Mass Effectseries, discovering interesting connections for laymen in this matter. In fact, multitude of criticisms made to the saga and the few statements made by BioWare emerge from this broad knowledge, dismantling some arguments of the Creator Studio of this saga.

I, Shepard follows standards Edition of Heroes of paper offering a high quality product. The book is consistent thanks to its hardcover and gives a higher package. The weight of the paper is excellent, firm leaves which reinforce that feeling of having a book of magnificent Bill between our hands. The choice of blue as the main color is correct and fits well with the aesthetics of Mass Effect. As aspect we should highlight the failed choice of placing the “footnotes” in the interior of the book apart, making it difficult to read.

We have a book of easy and entertaining read that can be read without problems in a couple of sessions. Used prose is simple, although perhaps too direct and with one or another joke that clashes in what is supposed to be a trial or a more informative character written. As we pointed out at the beginning, are facing an ode, a song to Mass Effect, and is something that the author from the first moment.

It would have been much more interesting to unravel the secrets of the saga and delve into creative and similar processes that led to BioWare to create Mass Effect. But if the company put latches on wheels, it is difficult to make a serious inquiry or even provide novel data that have not their appearance through other channels. No doubt this is the “Windmill” with which the author of I, Shpeard has had to fight to try to push forward this story and not be able to reveal more secrets.

Nevertheless, its reading is enjoyable and even though it is far from works published by Paper Heroes such as “Portal and the science of the game”, it is less revealing in according to what matters. In any case, the references to works of science fiction are very interesting and certainly help to see with an attitude more critical Mass Effect, which is undoubtedly the main value of this work.

I, Shepard already for sale in paper Heroes.

Previous Analysis 0 Yakuza
Next Activision Blizzard, the best company to work in the world of video games