Fairy Tail reaching to Dead or Alive 5: Last Round! 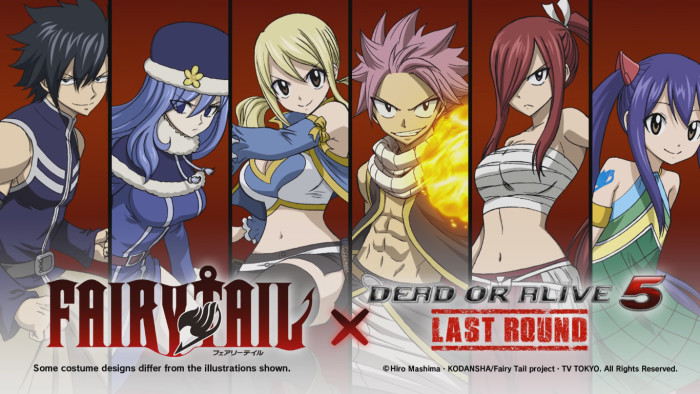 As fans know, Dead or Alive 5: Last Round is getting an insane amount of DLC’s in the last few months, all related to the different costumes of the characters.

From Halloweencostumes, up to the day of Valentine’s day, going through other special as the pack ‘Deception’ or ‘Tropical’ pack. Even, there are some related directly with other sagas of video games, as the pack Senran Kagura, with popular costumes of this franchise, the Tatsunoko pack or the pack of Samurai Warriors.

The latter group of DLC’s is that talk about now, maybe it has put on sale the last DLC from a long list, based on the popular manga and anime, Fairy Tail.

On this occasion, be able to use the most popular characters in Dead or Alive wearing the typical clothes of the mentioned anime. Even have been modelled some hair and faces to bring even more physical of the different characters. Definitely, it has been a good job after collaborating with the creator of this manga, Hiro Mashima.

Fairy Tail has not had a real presence even in the West in any video game, except for some minor for the Nintendo handheld delivery, so it is all a gift to see that you have put so much effort to its characters, in a way, one of the main fighting game.

The list of characters (and the character modifier) it is as follows:

Most of the characters, the physical resemblance is amazing, as it is the case of Erza or Wendy’s. However, it shows a lack of important Gray or Jellal, whose blue hair is required in both characters. In general terms, however, continues to be a good job. Obviously, and as it could not be otherwise, the clothes are completely destructible.

If you are fans of both franchises, you can purchase already it is pack your common platforms.