Breaking News
Home / News / Freedom: Rebels in the Darkness, the game who was ahead 25 years

Freedom: Rebels in the Darkness, the game who was ahead 25 years 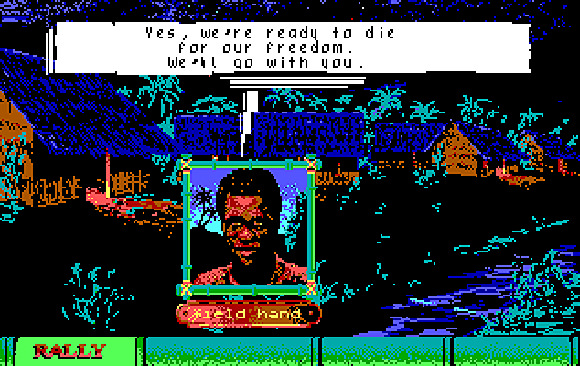 This morning I’m in KillScreen with the news that Freedom: Rebels in the Darkness is now available in the glorious trunk of memories of Archive.org, a place in which since they started up old videogames legally is beginning to become a sort of digital library of Alexandria. The fact is that Freedom is a true rarity: a role-playing game about the enslavement of black people right now would be somewhat interesting but not particularly surprising; the striking here is that this social character adventure was released in 1988, when the game was dominated by the newly seated franchises that would take the leadership of the industry during the following decades.

Mindful of this excerpt from an analysis of Keith Campbell collecting the own KillScreen magazine Computer + Video Games in the number 88, published in 1989:


I must admit that when Freedom arrived at my table was a little tired. I had played macho white barbarians with swords in almost all role-playing games which had loaded on my computer, and to be honest I was beginning to hate them and tired of them. But after reading the introductory text on the cover of Freedom, I felt the itch to play role invading me once again.

I do not know you, but to me this snippet I been popped the head: an experienced player to complain of abuse making the white male power fantasy game and claiming the games of a more adult nature, on issues that affect the real world, social motivations and historical justice… in 1989!

In fact, investigating about Freedom, I have given with the cover of the game for Commodore Amiga computers and draws attention the fact that the illustration is completely daughter of his time. While history speaks of the humanitarian tragedy that was slavery (mechanics, in fact, relies on stealth to escape from a plantation without alerting the guards and their dogs), the image shows a type that seem to have stripped of black features, that holds a fucking Herculean musculature, which is breaking the iron chains that imprison her wrists with the single strength of its prodigious biceps in a gesture of male 80s more epic. To the typography of the title, metallic, chrome and bright as the logo of a chopper, invited more to think about an album of Blind Guardian that a DVD of roots.

Greater thematic contrast occurs between this same illustration and the title screen displaying the game itself at the end of the charge, before you start the game. The character in question does seem to be black, or at least have least Caucasian features, is completely naked and, although it also breaks the chains, looks more the symbolic act of a kneeling man who rebels against oppression. The image is dark, the typography is a nocturnal blue, surrounded by small flames; It is an illustration that suggests a desperate situation, a fight almost instinctive and animal for survival and dignity. There are no epic in that screen: there is drama. 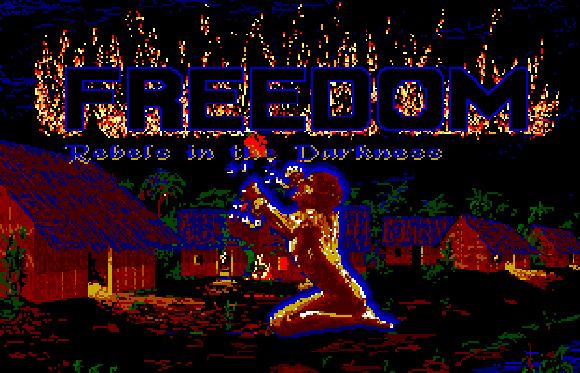 Is possible that the scope of the game designer, the martinicense Muriel Tramis – which, surprise, she is a woman and is black-, end where just the lines of code, and that the cover of the game was responsible for the French Studio where he was working, Coktel Vision. The box cover – rather more important in 1988 that today, by the physical copies and shelves in the shops – seems to tell us that the launch of the game was, like everyone else, subject to the business trends of a period which, as Keith Campbell said in his full of exclamation points and colloquialisms youth review had monopolized roleplay-based pure testosterone.

You have been published today, Freedom would go head part of a type of game that makes less than five years we’re seeing flourish in a particular area of the greenhouse indie as a response to three decades of thematic exclusiveness and lack of interest in issues which are now beginning to have their own space, such as romantic relationships, homosexuality, the loss or mental illness. Topics that have been found more reservations than any other novelty in the history of the medium and that have arrived, according to the reactionary right, to destroy the game as we know it. To take away our swords, our laser pistols and our armor sexy.

Texts of Campbell, or the existence of Freedom: Rebels in the Darkness and its creator, come to demonstrate that social concern in video games is not something as new as we were believing, that already existed (often scarce and ignored) voices calling for a little more diversity, political commitment, courage and responsibility. Reflections on genuinely human issues, something that has always been in video games but often camouflaged in the shelter of the fiction – allegories about racism among extraterrestrial species in space stories, references to the Fascist regimes in medieval fantasy worlds, utopias futurists-sexual discrimination complaints, began to be called by its name and framed in reality present or past. Harness the potential of video games, regardless of their technical ability in every age, always had to reach a little more.