Two years ago Valve finally included the option of automatic reimbursement on Steam, and to many it seemed that it was one of those changes that would end up by spreading to the rest of games sales digital platforms. Until today returns could apply to Sony and Microsoft directly, calling customer service and exposing the particular case to justify the refund in question, but you missed that series of rules and options that would enable us to recover the money for a digital purchase without explanation, and looks around the new Microsoft policy.

The first information users of the Xbox Insider Program that usually have shared them access to the additions and changes to the system before the rest, like the Sony or Valve beta program, and would have certain limitations apply as is. 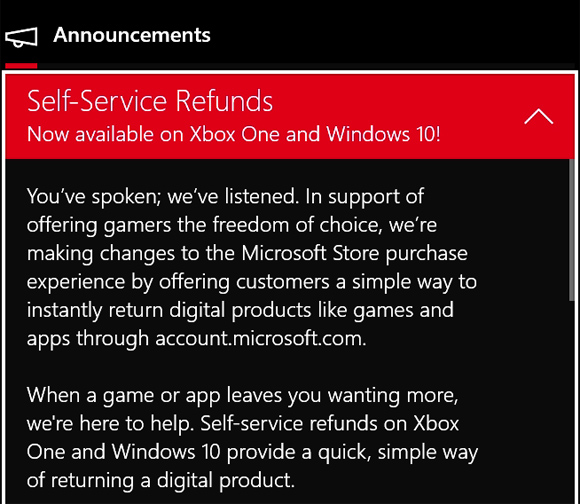 For example, applies only to complete sets and payment apps, whereupon the DLC would be out as the season pass, and only may apply for refunds within the first 14 days after purchase and provided that have not exceeded the 2 recorded hours of game. There is also a little strange rules, as it is necessary to download and run the game or program to be able to claim a refund or that can not be ordered by you the money back until at least one day after the release date of the game.

As you might expect, Microsoft reserves the right to block access to those users who consider that they are abusing the system of automatic refunds. The company has already confirmed that the autorreembolso option is now in pilot phase for the members of the Insiders Program, but did not want to give dates on when you will reach the rest of users.

If Sony and Nintendo have just implemented someday this type of option not only it would further protect consumers, but it would also expedite this process which in Europe are at issue through phone calls and long conversations (in USA or that) making use of a single button and a form. All that is to maintain the minimal human contact, is always a good idea.

Previous Microsoft could allow to return products in your store for Xbox One and Win 10
Next Special Toukiden 2: how Hunt the larger Oni?