Now available the new Xbox One interface, these are characteristics 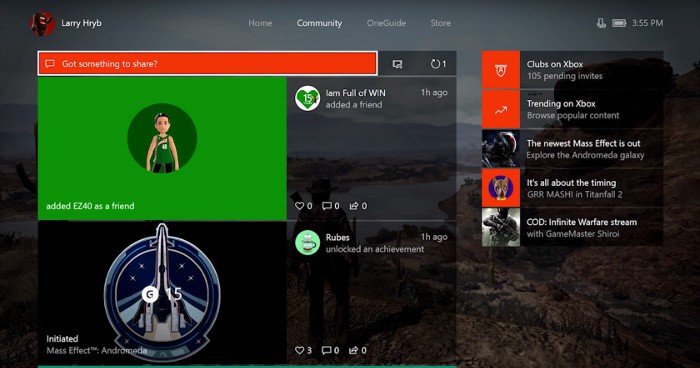 If any Xbox One interface seemed slow or poorly optimized (sometimes, ourselves gave us that feeling), we have to say that there are developments in the respect. And it is that a new version of it, which has been refurbished and adjusted to the new industry standards is available for some few. Dispose of the image of the former aspect, because sufficient changes have been made, as we are facing something almost entirely new.

Firstly, to say that the upgrade of the interface is now available for all the Xbox One, by what it you should skip the next time that you start the console. The list of changes is large enough, so we will focus on the main modifications.

First, say that it has introduced a redesign in the start menu of the console, which now is different from what previously veiamoscon. In addition, on the Platform have been integrated systems such as Beam, service which serves to make streaming content at any time. Cortana also has its own integration, what searches are to be faster and more effective.

On the other hand, mentioning that the operation of the Home on the remote control button has been changed. Now, access to the different functions is more simple and comfortable, with fewer steps to get to the options. Not to forget the optimization of the system and the management of multi-tasking, aspects that have received several improvements.

The weight of the update just comes to 1 GB, so we could say that the size of the patch is small. That Yes, the number is more than enough to bring all what they wanted.

Without a doubt, are facing a small update, but ambitious. Not in vain, you don’t have to forget that Microsoft will start soon the Creators Update de Windows 10, so This is a step in the Xbox One in order to unify the two systems. Or, at least, given similarities.

Previous EA confirms Star Wars Battlefront 2 officially, it will be released in 2017
Next Destiny 2 on sale September 8