Overwatch we invited to capture the flag in his new event 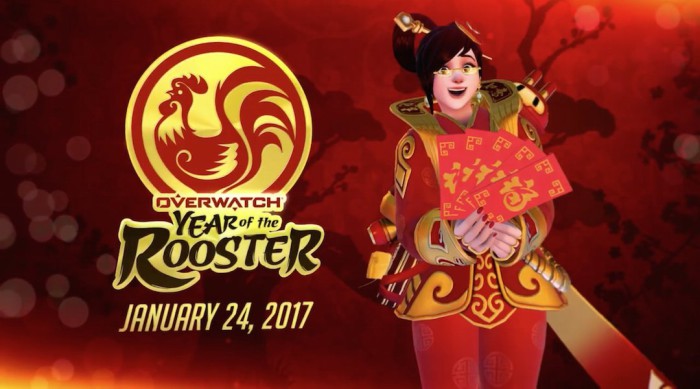 Overwatch releases a new temporary event on the occasion of the arrival of the Chinese new year. A unique opportunity to unlock thematic appearances and enjoy an alternative mode of play: capture the flag or better said “capture the cock”. From January 24 to February 13 will be available this event on PC, PS4 and Xbox One with all its additional and added content.

Apart from the barrage of appearances and cosmetic elements introduced by Blizzard in this type of updates, perhaps the most interesting of all is the arrival of the new brawl in which we are invited to capture the flag. A widespread form of play in other online shooters and that for some reason Blizzard has not entered in Overwatch. Perhaps this temporary event serves to study the feasibility of introducing a mode like this permanently in this title.

With respect to the characters who receive new appearances, Mei seems returns to star in the event, along with other characters who have also received a good portion of additional Roadhog or Tracer appearances. All these “skins” can manufacture with game currency or obtained in themed boxes from this event linked to the Chinese new year. That manufacture new appearances, has a significant additional cost, so it is convenient to be prudent and selective.

After this event is unknown to which will be the plans of Blizzard to Overwatch. The company confirmed that not there intended none related with San Valentin or similar, by what is possible that have a drought of “festivities” to arrive again to the corresponding event of summer. As for persistent content, nor are there many new developments regarding this, beyond of the arrival of a character additional but without official confirmation at the moment.