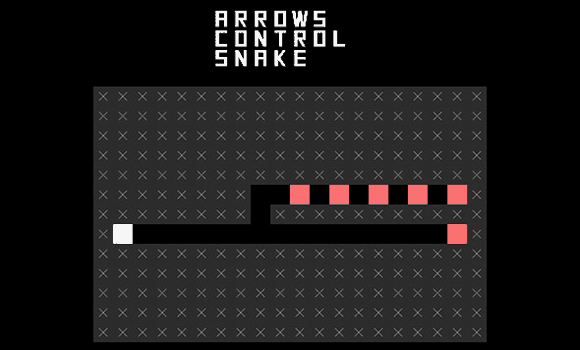 There have been many versions of the game of snake, the legendary game of snake, from the Blockade of 1976, the first incarnation, until any of those apps that mimic the Snake coming in mobile Nokia, recreation of phone (your buttons, your screen, your locates) included. It is not difficult to find which replaced the snake with a penis. There are versions in which the Snake is a worm. Many of them, about all those who drink of Blockade, are multiplayer; the aim is not so much survive the gradual growth of the body of the snake like cutting the passage to other players. Accelerated and with certain color palette, this game is Tron.

The new game of Pippin Barr, SNAKISMS, transforms the game of the snake in interpretations of or small jokes interactive based in different schools of philosophy and ISMS well known.

The first hit of SNAKISMS is to recognize him to the game of snake, in its most famous Variant (the Nokia, the gather apples that will expand the body, doing more and more difficult to maneuver around the Board without crashing against the walls or yourself), the ability to explain an idea, by simple to be, through their mechanical. All games do, in fact. What does Barr here is reminiscent of the famous level of Banksy (was not his own, clear) Super Mario maker, in which Super Mario is facing a cliff to get a coin that never reach. Using the same ingredients as any other level of the game is exposed an idea: the same thing that expands and assures the life of Mario, coins, takes you to death when the world conjures so that failure is the only option for him.

Transferring this approach to the Snake (take the basic mechanics and twist it to modify its meaning), Barr gives shape to twenty variations transmitting “different”ISMS”or philosophies through the mechanics of the game” by making small changes.

«The process here has been mostly cerebral,» he explains on the creation; “me sitting with a book or my laptop and literally pointing the names of philosophies and trying to get the way that a Snake could do with them.” «A clear division”which was presented to him was ‘if the philosophical concept should be reflected only in the experience of the game that the player has, or if there is some kind of moral duty (or other) representing the concept in your own code’. Hence sale, for example, his version of nihilism; It is a blank screen in black, blind and with nothing to offer to the player, who forms expand function that is responsible for creating the elements of the game (Board, the snake, the apples…) so what he thinks can be anything. 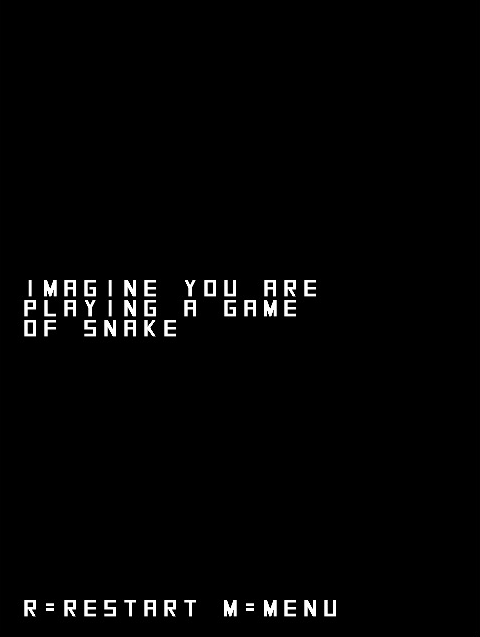 Some of the ways in which it subverts the snake game are great. In pessimism, for example, apples are off the Board, which is smaller: death is inevitable for who wants to pick them up. Optimism, on the other hand, the Board is filled with apples quickly, because increasingly appear faster. Asceticism, take an Apple means losing the game, because it goes against the lighting through the material withdrawal; in capitalism, instead of points have dollars, you will be spending a as we buy apples: at the end, the player just locked in a cage with a product that may not possess in any way. («Game Over. («Died with $0 ‘, is read to the end.) The apocalipsismo suddenly ends the game without notice; the post-apocalipsismo released the snake in a scenario made to shreds without any objective. In monism, all the elements of reality consist essentially of the same, so it is possible to eat apples but also the limits of the stage, marker points, the menu or even the body of the snake, which reappears then at random points following the basic rules of Snake. These basic standards are those applicable narcissism, which is just that: a normal game, that when it opens a window of the Mail Manager you have by default on the computer that you send an email to Pippin Barr. Subject: “I love your work!”. Text: «I wanted to take a couple of minutes to write you an email about how much I respect and appreciate your work…»

SNAKISMS is, thus, a kind of «philosophical successor», says Barr, PONGS and BREAKSOUT, two previous projects that explored the possibilities of the well known formulas of Pong and Breakout. The beauty lies in how the various ISMS is permeate in all realities of the game, on the outside and on the inside, even where the player can be reached not only through the program; that is why the code is also available, for those who wish to examine it.

You can play SNAKISMS here; It works in any browser, both computer and a mobile phone.

Previous The Crypt of the NecroDancer expansion is now available on advance access
Next Eliza, the vamp of Tekken 7, receives a new trailer