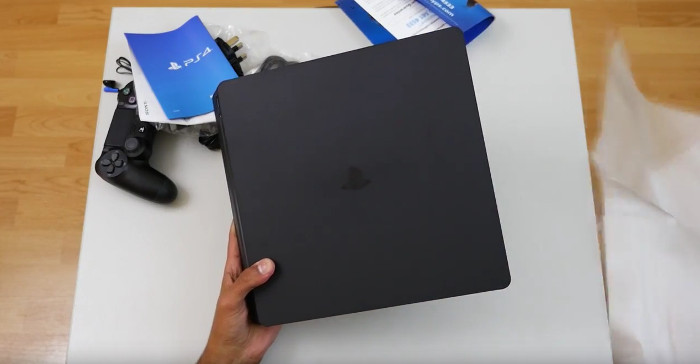 The rumors don’t stop occur. Since few days ago we are commenting on all the gossip that exist about the supposed Playstation 4 Slim, an apparent game console by Sony which, however, still not has been announced officially. The information more reliable arrived makes some hours, when a user sold an of the consoles in Internet and, in the ad, showed several photographs of the machine. However, we have recently been surprised.

Again to exit a rumor. Or, rather, a video that shows a supposed Playstation 4 Slim. The channel of Youtube ZRZ has published a video in which is shows the unboxing of an of these consoles, by what could tell that the talk begins to take force. In fact, thanks to the clip is can verify some of the features of the product.

In the video is can see, among others, the remote control DualShock 4, besides them tickets available and the design remodeling of the console. The machine shown has a disk hard of 500 GB. Apparently, almost all of the components have been placed inside, so we could say that it has saved space in all directions. A ten for Sony. In the case that this is the new Playstation 4 Slim, not there is doubt of that the work has been well done.

In any case, we cannot say much more about the video due to know if it is a mount or the console itself. Don’t forget that, initially, Sony will leverage your Playstation Meeting from September 7 to announce two new machines.

Previous Do you want to see four hours of Nioh?
Next Dragon Quest XI reconfirms its presence in NX