World of Final Fantasy is one of those adventures that will hopefully looking forward to since its announcement. Was revealed during the Conference of Sony at the E3 of 2015, but was overshadowed by the arrival of Final Fantasy VII: Remake, announced just after.

Without, however, as they have gone through the months, our interest in this title is on the rise. We are in a new world, in a new adventure, which not only has some key points that is reminiscent of the classical mechanics of role playing games, but brings some interesting new features.

We have the possibility of raising monsters and creatures, most important of all the franchise, like chocobos or begimos, as well as share the stage with iconic characters such as Cloud, Squall, Quistis, Vivi, Yuna or Cid.

Perhaps one of the most important is that you can vary the aesthetics, from Super Deformed (or Chibi) with normal proportions, based on our attitude against the creatures that we crossed on the way. You can change between aesthetics and another choice. 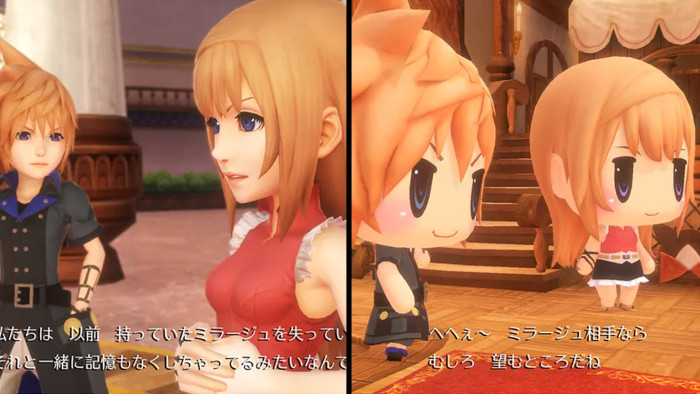 In Final Fantasy World we will handle to a pair of twins, Reynn and Lann, through all the Final Fantasy universe. The argument the placed without memory in a world unknown. Each one of them discovers a piece of armor on his arm, with an enormous amount of power.

From here, part adventure. For the moment, and until their departure, enjoy the content that Square-Enix is releasing us. On this occasion, here’s a battery of images.

World of Final Fantasy will be released for both Playstation 4 and PSVita, and will go on sale in Europe from October 28, 2016.

Previous Assault Suit Leynos comes to PS4 with the flavour of a classic
Next Last minute shopping! -Steam offers