Call of Duty: WWII could have a 48-player online multiplayer 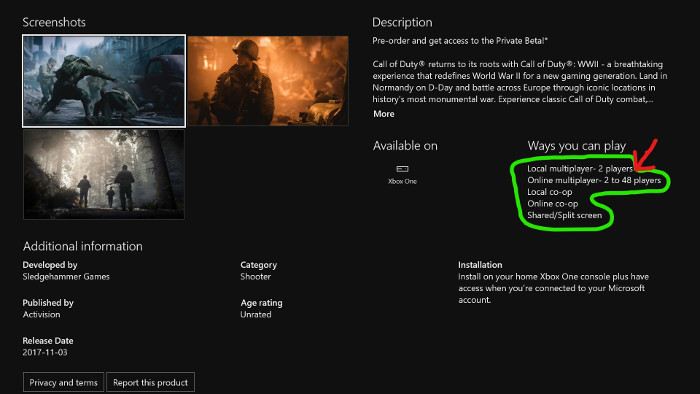 We have to recognize that we like massive battles in video games much. That have big multiplayer maps in which nearly a half-dozen players are fighting, side by side, in order to meet the goals is something very epic. However, it is also difficult to implement. Especially with regard to technical details. Battlefield 1 already we have seen the potential of the online modes. Although Sledgehammer Games could be putting the batteries in order to achieve something similar in Call of Duty: WWII.

According to a recent leak, the multiplayer mode in Call of Duty: WWII could have support for items of up to 48 simultaneous players. At least, that can wield a screenshot extracted from the own tab of the game.

Specifically, on the tab of the Call of Duty Xbox Store : WWII, you can see the following text: “Online multiplayer – 2 to 48 players“. Yes, this means that all those players will be supported. Is to know whether the improvement will be in the own online, or simply in the chat’s conversation. By the time we describe the data as’s rumor, bearing in mind that it has not been confirmed officially.

Finally, don’t forget to Call of Duty: WWII will be released on November 3, for PC and Playstation 4, Xbox One.