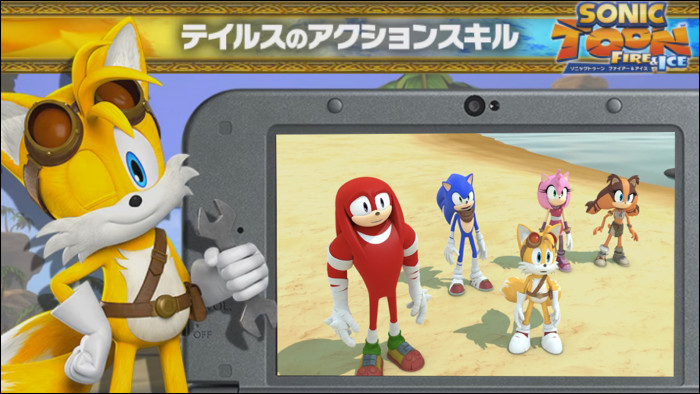 As you already know, Sonic Boom: Fire & Ice, the next installment in the Sonic franchise, you will arrive in a few days to Nintendo 3DS, console that will maintain the exclusivity.

On the eve, we get three videos that show the characteristics of three popular and iconic in the saga characters, each of them presenting completely different skills.

Miles Tails, two-tailed Fox, you will need a ray gun that can paralyze enemies. In addition, this beam will offer us the possibility of breaking certain objects. Knuckles the Echidna may use a small dash, besides an ability particularly that you will allow dig. Finally, Sticks the Badger will have a boomerang with which you can activate certain mechanisms.

You can see the three videos below.

Sonic Boom: Fire & Ice is a spin-off in the saga Sonic the Hedgehog, keeping the 2D platformer style. In addition to the three mentioned characters, we can use Sonic (obviously) and Amy. As we move forward in the episodes, you can alternate from one character to another.

The novelty in this game is the mechanics related with subtitle Fire & Ice. In addition, there will be levels bonus, challenges, special stages, and a two player mode.

Sonic Boom: Fire & Ice it will be released on September 30, three days after leaving in America. Australia and Japan you arrive 1 to October 27, respectively.

Previous Caroline and Justine star in the new trailer for person 5
Next Criminal Girls 2: Party Favors lands in PSVita