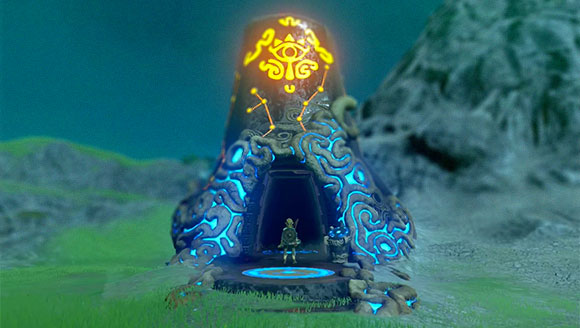 Warning! This article contains spoilers about The Legend of Zelda: Breath of the Wild.

In these last two weeks I’ve seen a lot of people commenting the Myam shrine, one of the first tests that crosses one in The Legend of Zelda: Breath of the Wild. In three groups of WhatsApp I have seen how different people rose videos and pictures of the screen, showing how solved the sanctuary; on Twitter I have met with colleagues and strangers who did the same, this time with the window open so that you see them all over the world. The other night, a friend told me with the Disney deer eyes how had exceeded the Myam sanctuary; with a huge smile on your face, another friend replied that he had also solved it that way, and it was as if we were sharing a secret that only we had recorded three worldwide.

First, the presentations. The sanctuary of Myam is near the village of Hatelia (is your nearest teleport point, in fact) and is designed to be the first or one of the first that is one using the control by movement. In it there is a floating labyrinth where he drops a ball, that Link must be directed toward a ramp by moving the structure carefully so that the ball reach its destination without falling into the void, in which case the test restarts; for this purpose there are tilt and turn the console or the remote control, a process that can be frustrating or annoying. I would say that at any point in the game there is another test as bloody as this related to the gyroscope; in any case, is abnormally demanding proof to appear just at that moment, beside the first village that Link visits, without notice or possibility to warm up before. Myself I threw myself a good time to finish it: right now I don’t know if it really is so difficult, but a typical test which gives me a fatal crash if after the third attempt I have not achieved what I proposed. Vandal guide ensures that the sanctuary of Myam is ‘of the first requiring to be tranquil and good management with the remote control to complete them”; the Official Guide contemplates the possibility that the player has problems with this test.

But there is a very easily finish this shrine. While passing the test, I spoke with several colleagues who were also playing to the Breath of the Wild; as you might expect, the sanctuary of Myam came out in conversation. Someone claimed to have found an incredible way to solve the puzzle: instead of manipulate the labyrinth with surgical precision to guide the ball to the goal, giving it a full turn commanding platform view leaves a smooth side in which ball falling didn’t find any obstacle, and that allows you to take up the ramp that leads into the hole with ease. It really seemed that someone had found a unique solution for the puzzle; that he had broken the game in a way not intended by Nintendo. The possibilities were huge: from other ways would be broken that game so great, so uncontrollable, so strange within a tradition of adventures where each piece has a site and only, and the machine does not start if not done everything the right way? In how many ways can a debacle of this kind be forced?

But the truth is that the shrine of Myam is designed precisely so that you give the return command and break the puzzle. The official guide of the game explains the more explicit solution, but also it gives is the other, the alternative; the give the return command. This puzzle is thought to have several solutions: a complicated, which cost a little more of the account, to almost anyone who arrives there in the early hours of departure and other very simple which can be reached by applying this lateral thinking which is usually remembering Gunpei Yokoi, designer of the Game Boy; also all the intermediate which may arise, by dropping the ball in the hallway closest to the exit or using the platform that ball come out flying and fall into the pit. It is a moment early that puts you in a situation: you have a few tools with a few typical applications, but the game wants you to know that there are alternative ways of using them, and that those ways to tackle the game can have benefits or rewards. When you leave the sanctuary of Myam, perhaps you remember other sites in which could be an alternative solution similar to that of the labyrinth and the ball. And if I can implement a strategy similar to other situations? And if, by default, there is a clear way of doing things and other ingenious, simple and therefore more effective? And if some secrets of the game only you can find using lateral thinking? In my game, the first thing I did in the next shrine which entailed me using the control for the movement was to twist things, look for the part of the puzzle that has smooth face, the simple solution, the trick; I remember thinking “well played” when, trying to turn another platform to skip a puzzle deceiving designers, I found an impassable surface full of spikes.

It is convenient that the sanctuaries are under the ground, and be in the basement where you learn techniques of this kind, cheering to see the surface, when we left after having passed the test, with other eyes. The shrine of Myam is a particularly powerful example of this peculiarity of the design of Zelda, and one of the reasons why the game has seemed bright; It is, moreover, a clear connection with the previous deliveries of the series, the key objects that were in the dungeons where allowed to find new secrets in the world already explored, but with a twist that gives freshness to a formula, which by pure experience, a time recalling more rigid and perfect structure of a clock that the Epiphany of discovering that a pump can open a hole in the wall and find a new layer on the map, as in the first Zelda. (I find it significant that the fact of remembering the past is so important.) Again, lateral thinking applied to design: an alternative solution to replicate the sensations of previous games doing something that is very different in appearance.

I see a very intelligent complicity between the game and the player at this shrine of Myam, anyway. As I said at the beginning, when I was talking to my friends and we mentioned the trick to give her turn the Board did as if it were a secret that no one can learn, as that machine vending which does not work well and that check a bag of potatoes free if you press a particular key combination; If it comes to light, perhaps go someone to fix it. It is a moment that does something similar to the first level of Super Mario Bros., where an innocent encounter with a Goomba teaches you with one blow almost everything you need to know to complete the game. I really like seduced me by these small deceptions, and The Legend of Zelda: Breath of the Wild is full of them; It is a game which can learn much because he likes much teaching.