Fallout 2 and the mystery of the lost children

It is the year 2241 and the world recovers after a devastating nuclear war that has plunged humanity into a chaos that begins to recover timidly. The new generations are the only hope in this shattered world but… where are the children? This is a question that perhaps many players of Fallout 2 and those who approach for the first time this title by various issues have arisen.

A question whose answer is not new but if it reflects the absurd censorship can be sometimes. The version of Fallout 2 , who came to Europe and other geographical regions was “clipped” so that infants who appeared in the game were eliminated. The reason? Apparently the Europeans were very aware then about violence against children, and Fallout 2 allowed the player to destroy radioactive wilderness walking innocence embodied in them without many punches.

Despite dealing with controversial subjects, the children was a taboo subject in Fallout 2

A decision is controversial for several reasons, Fallout 2 is a game that is not cut anything and that tackles thorny as slavery, drugs or prostitution issues. All this without skimping on all violence explicitly that you could recreate this game with his “humble” graphics engine. All these issues seems to not matter, but if the thing has to do with children alarms soar. Because of this, neither short nor lazy proceeded to remove all of them play no more punches. No doubt a work well done, or maybe no?

Rather the latter since although children had disappeared, its footprint in Fallout 2 was. This is must to that there are several missions that involve interacting with infants in this RPG and of course those missions remained in the game. Therefore, the players were situations in which could not complete certain assignments because “LAD” that we had to speak had volatilized.

As you can see, the result was all a fudge that only managed to maim a part of the game and give European users a trimmed game experience. Faced with this situation, soon arose mods that restored the children of Fallout 2, re-creating the experience of the original game that was trimmed on grounds of censorship. And it is that no one in their right mind would “crush” the poor and innocent children for fun, but banishing them from the game is not the solution.

The protection of children is of course one of the maxims of humanity, but in a universe as devastated as the recreated by Fallout , it seems almost childlike to take a measure as drastic as this. In the modern games of the series, Bethesda has chosen to maintain children, transforming them into beings of great power given his immortality. That Yes, you can not finish with the kid but if you can do that they enslaved it’s lifetime. If that is not hypocrisy…

Apart from this issue and returning to the theme of lost children of Fallout 2, the truth is that the creators of the title contemplated the possibility that some players effectively with the lives of the inhabitants were younger wilderness. For those who choose to carry out these actions created a title karmic quite simple and direct: “kidkill“. 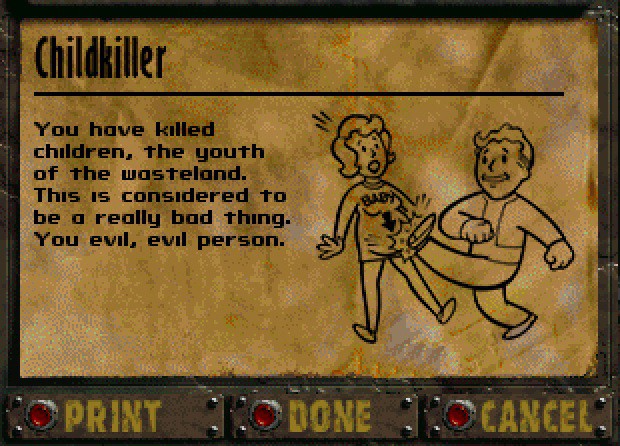 As you can imagine the consequences of obtaining this nickname was disastrous for our reputation since nobody in the game wanted to relate with us. This is the reminder that in the nuclear wilderness children more that they never are the future and kill them is sentence to all humanity and his small revenge. A heavy and shameful slab for those who pass the final moral frontier.

However, the controversy does not end there. The “kidkill” of Fallout 2, as well as all titles or nicknames that we could acquire in the game, were accompanied by an illustration that reflected that status. The artist responsible for making these drawings had enough problems to reflect a direct, but not too hurtful, something so brutal as ending the lives of children. A job that gave him many problems and even led the artist to self-censor. A fact we not met until long after when it revealed the original drawing against which finally was included.

After this little tour of Fallout 2 and one of the most shameful episodes you might ask if really these missions are worth. This is a question that is quite difficult to answer, since it is not that they are especially memorable, but it is true that they bring a different game approach. In the cruel world of Fallout, the children and their feats included a touch of innocence, something perhaps much needed in the world without hope that recreates.

Then,Fallout 2 already have incorporated the children? The answer is no. The version we have is the censored and one that can be purchased by digital distribution platforms has all the ballots to be the European version of the game. In any case, the mod that restores the children in Fallout 2 is well known and its installation does not entail any complications. If this chapter in the history of this game had gone unnoticed to you, it may be a good time to recall it, but this time to the full.