The London Museum recreates the great fire in 1666 in Minecraft 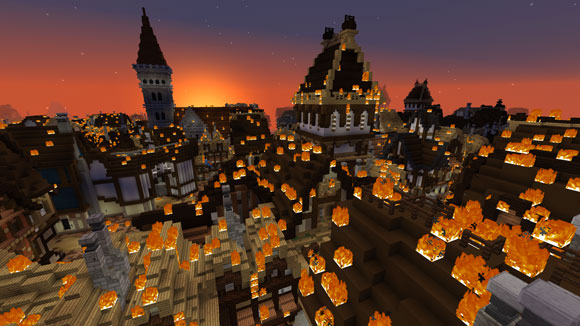 The Museum of London, dedicated to documenting the history of the city, has released the last of their three Minecraft maps that recreate the Great fire in 1666. This last map focuses on the reconstruction of the city. the other two (published in July and September of last year) cover the city before and during the fire.

The map allows visitors to walk through the destroyed streets of London and try designing your own version of the city. Through four major figures of the era reviewed the reconstruction process up to Carlos II, the King of England at the time of the fire; the ideas of Christopher Wren, John Evelyn and Valentine Knight and Richard Newcourt on the new streets and buildings of the city rebuilt are presented in map to exploring in Minecraft.

With those ideas in mind, and with the help of a number of special blocks that represent the city in miniature, is proposed to those who visit this map recreation to scale of a new city, “its own vision of London”, according to the press release.

The project is the result of collaboration between the Museum of London and Adam Clarke, which we already knew by his use of Minecraft for educational purposes. In 2014, he worked with Tate to create Tate Worlds, a collection of maps inspired by works of art which presents the work of Derain or Peter Blake via Minecraft maps. The project seems something stopped, but your website says that the next installment should be a diptych of maps based on Dali, Magritte and De Chirico.

The collective Blockworks, which uses Minecraft to create facilities and virtual spaces for galleries and museums, and Dragnoz, with whom Clarke had already worked on Tate Worlds, complete the team of this ambitious trilogy of maps on the great fire of 1666.

The maps are only a part of the activities organized around the Fire Museum, 350 years after it occurs. There is also an exhibition, entitled Fire! Fire!, addressed to the family and that interactive has a major role; There are also explains how was London just before the fire, how was the disaster and consequences had, in addition to how was reconstruction.

The Museum of London, as we see, is not the only organization that has found an interesting resource in Minecraft to present their ideas in attractive and interactive way. The Danish Geodata Agency created in 2014 an ambitious map scale of Denmark, which occupied 1 TB, and that was soon attacked by groups of trolls. PETA, the animal rights group, created that same year an animal paradise where animals could not be attacked; a place in which to live in peace with all creatures.

There are other interesting projects in Minecraft, in fact; I especially like The Reef, combining fragments of the many worlds that exist and have existed in Minecraft to create stunning mosaics that are testimony to the work of the millions of people who have created things in the game of Mojang. It is a great project that drew the attention of the public library of New York, who considered it “a study on how study, and perhaps remember, what we do today».

The great fire of London of 1666 maps can be downloaded here.

Previous Cities: Skylines will be available on Xbox One on April 21
Next Mad Catz is declared bankrupt