Breaking News
Home / News / Against the pirates: Steam shall not take into account analyses of games not purchased

Against the pirates: Steam shall not take into account analyses of games not purchased 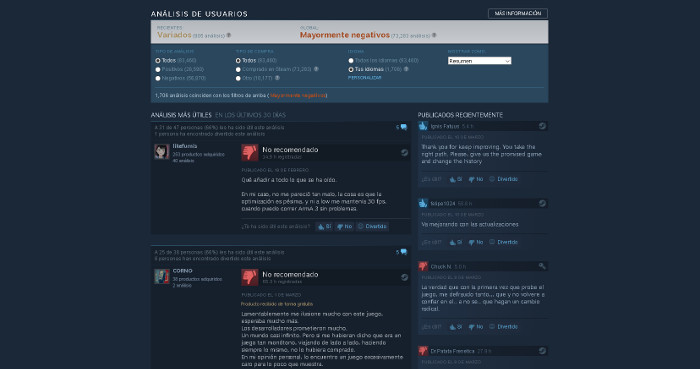 As you know, Steam has become a small community where anyone can expose your opinion. In fact, users themselves have the opportunity to put a note to video games on sale. And this issue is taken into account in the global note. So far, of course. Apparently, the platform managers have realized that there are analyses by users, but they had been executed in pirated games. Or even without having played. To take into account the notes, the analysis could not be entirely successful.

Steam has been very clear: from now on, Notes users are taken into account in the global, will require that they have bought a copy of the evaluated video game. I.e., If not purchased, the notes will not count in the abstract. This measure will prevent users to specify not actual notes.

Mention one very important detail: not be taken into account the notes that have come out of analysis in which video games have been received for free, as part of a gift, promotion, or even from a free weekend. Moreover, there will be no limits on the analysis.

On the other hand, since Steam have communicated the change has already started to run, and that the analysis will receive a re-evaluation in order to delete the notes that have not been meeting the present system. The team has confirmed that “changes are made to reflect the sentiment expressed by users who have invested money in games“.

If you see something odd in the notes, you know why: Steam wants to only tell those that are real, and which are not affected by any external factor.

Previous Special Torment: Tides of Numenera, its links to Planescape: Torment
Next Mass Effect Andromeda will also have a patch day one… But only 2 GB