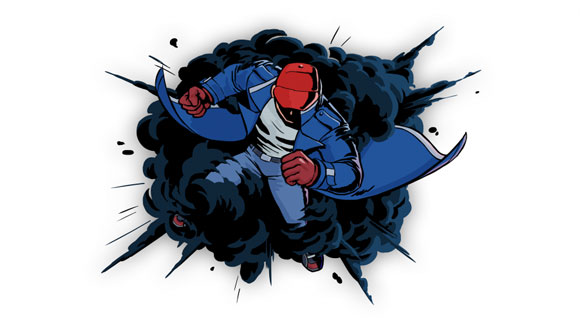 It is difficult to avoid the comparisons, which are odious. Out a platform and soon Super Mario game jump you on top of the head; leaves a car game and passes Forza skidding and makes it lost mud; a slower than normal, and from behind a corner sword leaves Miyazaki, become meme, and drops you scare hollow. Mr. Shifty, the first game of the Team Shifty, round you the ghost of Hotline Miami, the typical comparison that gets a kick at the door and makes you a tuxedo to shotgun pellets.

But Mr. Shifty, the game, resists comparisons with enough grace. Mr. Shifty going on Mr. Shifty, a guy who can teleport and who must stop his feet to another type who lives in a skyscraper. Types is the film, although the context is null and void; the burden falls full on combat, surprisingly versatile for the few pieces that has: teleport, a combo of three punches and objects with which one crosses from time to time. Only shot takes to kill you. The comparison with Hotline Miami, in this case more inevitable than in others, could have ruined the debut of Team Shifty, but the truth is that not: the resemblance softens the entrance to the game, which has in its favour from the outset a plus of familiarity that not to be a loan ceases to be useful.

You know the main goal, which is to clean level of enemies and pass through the exit door, but grace is precisely in the levels that pervert this basic approach. Mr. Shifty teleport allows cross bullets, lasers and walls provided that they are of a certain thickness, and that ability arise most suggestive game moments, when the light that shines is more yours: when you strain in a room and kill two enemies just in time to finish a third coming, alerted by the noise swinging a punch at the door and affixing it to the face; or when a base Dodge shots you get a poor Devil hit a shot to a barrel and causing a huge explosion which takes ahead everyone, least you, you also get to avoid the shock wave.

These situations are relatively frequent, and largely it is by the design of levels, which rewards who pays attention and unravel its operation. A pallet is almost never just a pallet, or a proximity mine is just a mine; both the props and traps can be used to give you the solutions turn more complicated, making the pallet on a stick (which guarantees three deadly attacks before break) or the keyboard of a computer in weapon, or picking up an explosive and planted it, until it explodes in your hands, an enemy in the chest. The distance with Hotline Miami becomes then apparent; If Dennaton is a lysergic version of a John Woo movie, Mr. Shifty is a crossing of cartoon Jackie Chan film and Marvel films. A superhero enters a room, three guys with machine guns opened fire, the hero hides behind a column and then takes a second of calm to take a cup and break it into the face of one of the bad guys; with his superhuman speed planted behind the other two and knocks out them with his fists. You can almost imagine the film playing Mr. Shifty.

The problem is not lack of distance with its referent, but what little they take advantage of their strengths. Only three or four recent chapters offer truly memorable situations; the first half of the game could be a tutorial is not to learn everything in the first two or three levels. The structure of the chapters, which are often reused areas to give the feeling of being really exploring different plants of a skyscraper, is bittersweet for the manner in which the levels are presented: on occasion, it is difficult to know if the challenge that you have gone through difficult or not, because one of these chain reactions that in other screens function as puzzle to resolve to deal with an impossible enemy Horde has taken place outside flat, on another website, unless you know very well what has happened. It is a relatively common situation that does not help to disguise the awkward pace at which levels, occur by mixing very quiet sections with unexpected difficulty peaks even in its final stretch. These peaks of difficulty the best battles of Mr. Shifty and more interesting challenges, inside, surely, because they tend to mix creative enemies that have been seen so far with obstacles of all kinds creating challenges that is so important to attack with firm hand as Dodge and keep in mind your position and that of others to control large groups of enemies that can be completed with you shot or a blow.

There are a few smart and stimulating moments in the four or five hours that Mr. Shify can last, but ultimately is not the comparison with Hotline Miami which detract from his memory but the own Team Shifty, that ruins the game scripted unable to create even the illusion of wanting to motivate who plays forward. Intentions sarcastic or disrespectful of the dialogues that cross your path between levels end up resulting in annoying: why should take you seriously a game that again and again not only does not take seriously to itself, but it seems to make less any possible compromise? Sometimes it seems to be the classic stupid video game history, although in reality, inevitably, a comment on those classic, stupid stories; himself sabotaging it as soon as you find the opportunity, using jokes from a very low level that is recreated without taste or grace. It is a childish script that emphasizes the futility of wanting to enjoy it; the end of the game, the last scene before the credits, confirms that the irony of the text is not sign of intelligence, but a childhood form of get rid of any responsibility, as if the incoherence of the script was not anyone’s fault but a natural event. There is nothing wrong with that game do not take seriously to itself, but it takes some skill and commitment to get that tone without, as it is the case, be irritating.

It can be a good example of that saying a holder of Ian Bogost, more sensationalist account, that video games are better without history. Mr. Shifty would certainly improve if nobody speaks; If it were simply a concert hostiones and teleports, an abstract Symphony of bullets, punches and broken glass, Mr. Shifty would be much more than a breaded clone of Hotline Miami. Even the many technical problems that has the game on Switch, the platform that I’ve played it, would be so painful; It is the only game that has me has suddenly closed (on four occasions, one of them during the end credits) all that I have in the new Nintendo console, but in addition the framerate, very unstable, makes very difficult sections of the easiest and, instead, makes things too easy on parts that were supposed to be swingeing challenges of reflexes and speed. I imagine that the blame is shared: feel Nintendo brought console of hastily, and that almost nobody (not even Nintendo) had too much time to leave all polished their games before publishing them. I would have loved to be able to defend the art of the loan, that take the witness who leave another game when it becomes available around the world and up to decide what is done with it. Mr. Shifty remains, in the end, in a curious attempt burdened by bad decisions and lack of self-esteem. [5]

Previous Overwatch: get the exclusive official D.Va skin
Next There are indications of a new offensive by Vivendi to control Ubisoft at the end of year